Own a honda accord and lost all of your keys? No worries, Triton Locksmith has you covered. No matter the year of your Honda Accord, we can make you a new key on the spot. Getting a replacement key for a Honda Accord at the dealer will not only cost you almost as much as buying a new smartphone, it will also cost you your time of towing the vehicle to their service department, spending a couple of hours waiting in line ( a couple of hours is the best case scenario) and the aggravation alone. Give Triton Locksmith a call and we will come to your vehicle wherever it may be located and we will make you a brand new Honda Accord key replacement on the spot. 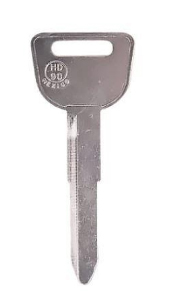 If you have lost the key to a honda accord between the years of 1982 -1989 the blank that should be used is the HD90. The HD90 key for the honda accord is a non transponder key and is fairly easy to make a replacement of. Our car key replacement technicians carry this blank in their mobile units and if you are in a need of a replacement we will have one ready for you on the spot.

Replacement keys for Honda Accord years 1990-1997 are still non transponder and will require no programming for your vehicle to start. Our automotive key replacement specialist will be able to cut you a brand new key for your Honda Accord on the spot and get you going fast.

In 1998 in the U.S the Honda Accord was already equipped with a transponder chip. Even though the key may not look as it is chipped, the plastic portion of the key is equipped with a small chip that contains necessary information that is unique to the car that it’s programmed to. The 1998-2002 Honda accord key is also known as HD106 and Triton car key locksmiths will always have it in stock. Once we make you a replacement key for your Honda Accord 1998-2002, we will also need to program the key in order to allow the vehicle to start.
The honda accord 1998-2002 key is also compatible with the following vehicles, though it is car specific and will need to be programmed in order to work:\1998 – 2003 Acura CL

In the year 2003 in the United States, honda introduced the high security “laser cut” or “sidewinder keys” . This type of key requires a special key cutting machine and looks very different from your standard bladed car keys. If you have lost all of your keys to a Honda accord 2003-2012 your best bet is to contact Triton Locksmith since most hardware stores such as ACE Hardware and The Home Depot will not be able to cut this type of car key. These keys are also equipped with a transponder chip Philips 46, which will need to be programmed in order for your vehicle to start.

This Honda Accord key replacement is also compatible with the following vehicles:

It may look confusing and make you think that only if you have a remote that you only then have a chip in the key. Triton Locksmith also offers regular transponder keys which are equipped with a chip but do not have a remote. To be frank those are more durable and more affordable than the remote keys, but we will leave the decision making to you. We always have them all in stock.

Compatible with the following: 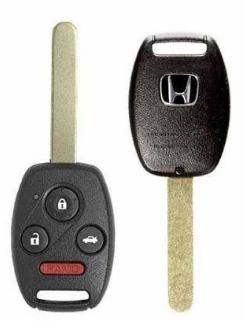 In 2003, the Honda Accord also had the option of a replacement key that has a remote attached to it. Many customers are under the impression that only if the key is equipped with a remote, that it has a transponder chip which is incorrect. When you call Triton Locksmith for a Honda Accord key replacement, we will provide you with the option to get a key with or without a remote which will depend on your budget and preference.

When looking for a Honda Accord key replacement, it is always important to note whether the vehicle is a sedan or a coupe. There is a difference in the FCC ID and the remote functions will not work. Even though when you call Triton Locksmith we will ask you the necessary questions, it is always best to do your own research. 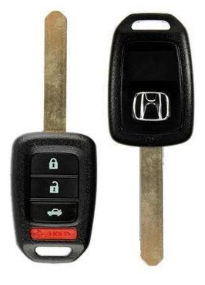 Compatible with the following

In 2013 selected trims of the Honda accord came with a newer style remote key. Only the LX, LXS and, the Honda Accord Sport were equipped with the newly designed remote key. 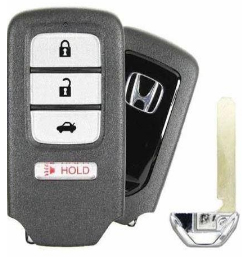 Compatible with the following:

Honda first introduced the push to start system in the 2013 Honda Accord. If you have lost your push start Honda Accord key and in a need of a replacement you can count on Triton Locksmith. The process of the key replacement is not rocket science, we have all the necessary equipment that is needed to cut and code the key in order for it to start the vehicle, and we will do the entire process on site! 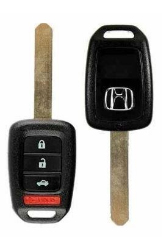 Compatible with the following

Although the shape of the 2013 Honda Accord key is the same as the newer model remote head keys (2016-2020) the frequency of the remote is different. If you are purchasing this key online and would like us to cut and program the key for you, please pay close attention to the FCC ID as well as the PN above, because otherwise the programming of the remote will fail. 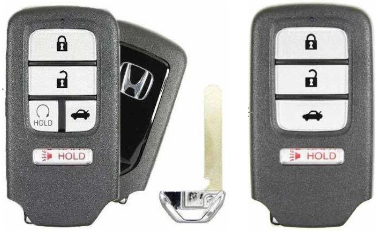 An important difference in the 2016-2017 Honda Accord push to start key replacement is the presence of the remote start function. These two key fobs above are NOT cross compatible. In other words, if your vehicle had a remote start option of the remote, the key fob without the remote start will not work. Feel free to contact us and we will determine the exact part number that is needed. 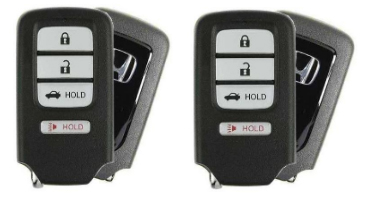 Once again we see the same looking remote with a different FCC ID. Pay close attention to those small details which will make a significant difference in the key making process.

As you can see Triton Locksmith takes car key replacements seriously. We have a large inventory of most makes and models and we will be able to complete the job on the spot. If you have lost the keys to your Honda Accord you can count on Triton Locksmith. Give us a call now and we will send one of our car key replacement specialists to your location.